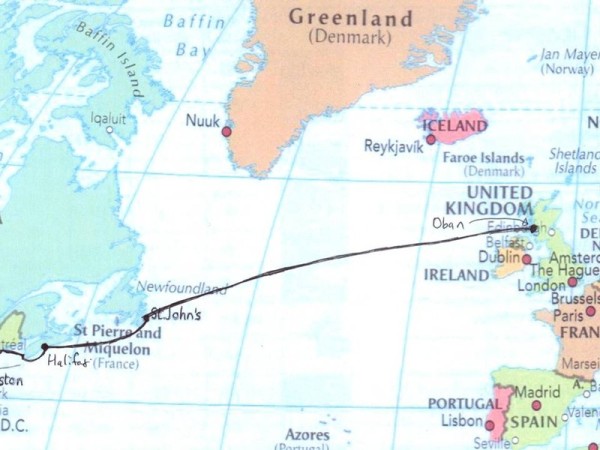 Art leaves us at St. Johns leaving Cindy, Megan and Dan on board with me for a planned departure from St. Johns on Saturday, 15th September, 2012 sailing non stop to Oban in Scotland where Vittoria will spend the winter in the marina at Craobh, www.craobhmarina.co.uk - not too far from Oban.

The distance is about 1900 nautical miles which should take about a fortnight to complete. 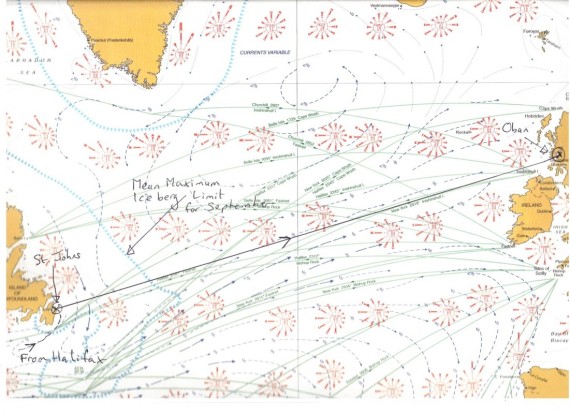 The above chart is extracted from the Admiralty Route Planning Chart for the North Atlantic in September and indicates the likeley wind strengths and directions at that time of year by the complicated looking red circles. For each circled location it indicates the liklihood of wind direction from vessel observations over recent decades. Basically, the longer the line pointing into the center, the greater chance of wind from that direction. The line is then scaled according to the wind strength. From the centre going out, the first thin line is force 1-3, the next, clear blocking is force 4, the next red blocking is force 5-6, followed by white blocking of force 7 and final red blocking of force 8-12 (gale to hurricane). Below is a blow up of one of some of these circles close to the middle of our intended passage. The relative size of each section represents the relative chance of winds of that strength.

The black arrows indicate currents, the green lines indicate ocean routes and the line of blue triangles surrounding Labrador and Greenland show  the average of the farthest point that icebergs have reached in September over recent decades - with iceberg sightings being on the landward side of the two lines. We will be inside this limit on the final day of approach from Halifax and then for the first three days upon departure from St. Johns.

There is also a chance of sea fogs occuring off the coast of Labrador during September!

The circle nearest to the black arrow on our planned transit line shows that the most frequent winds should come from a westerley direction and the most likely wind strength will be force 5 to 6 (17 - 27 knots or 31 to 50 kms / hour) with about a 10% liklihood of gale to huricane force winds.

Click on the red line above to get Iceberg planning information. It takes a little time to download.

On 16th July, 2012 a large section of the Petermann Glacier calved into the sea. It's about 130 square kilometres and headed south but it shouldn't get as far south as us until way after we've departed.