For those of you finding the text below turgid, scroll down to the photos.

Tuesday, 22nd November, 2011 flew out to Antigua to re launch Vittoria in Jolly Harbour marina, www.jolly-harbour-marina.com. In my opinion this is the most cost effective all round marina in the Caribbean. The staff of the marina and various service companies based there are the friendliest and most helpfull I've encountered in the Caribbean, the price is reasonable, there are a variety of reasonable restaurants and bars and a great beach within walking distance. Plus every cruisers dream - a large and well stocked supermarket that delivers your purchases directly to your boat!

Geoff, from the Cruising Association Crewing Service, who first joined me on my passage from the Canaries to Guadaloupe 2 years ago, also flew in to crew up to Puerto Rico.

A couple of days maintenance, provisioning and drinking with the locals and we set sail late afternoon on Saturday, 26th November for the British Virgin Islands. We had a 180 mile passage ahead of us and expected to arrive late the following evening.

There were no boats out there as we sailed through the night but a large cruise liner was slowly approaching our track. At one stage I heard it make a broadcast that may have been directed at us but I missed it and then it strangely turned around to return to whence it came. For the previous few hours we had been seeing lightning in the distance and before long an impressive electrical storm was over us with forks of lightning hitting the sea not too far away, driving wind lifting spume off the surface of the water and, at times, zero visibility as sheets of rain poured down.

I had been in far worse before (click on Lightning anecdote) but as it was the first sail of the season I was feeling a bit apprehensive and thought "why am I out here?" and, more importantly, started to re-consider my plan to single hand from St. Johns in Labrador, through possible icebergs, gales and fog to Oban in Scotland. I had wanted to do this for the sheer adventure of it but also because I thought I would be unlikely to get any crew willing to share the risks with me. However, recently two American ladies, Megan and Cindy, had asked me to consider taking them. In the height of the storm I changed my mind about single handing and on return to the UK confirmed their places!

By daylight the storm had passed and we were making such good time that shortly after dark we entered a popular bay known as The Bight on Norman Island, British Virgin Islands (BVI). We had planned to anchor but managed to find a buoy whilst narrowly missing moored boats as we explored the bay in the moonless darkness. We successfully tied up to it and made ourselves dinner, drinks and thus to sleep.

Next day, Monday, 28th November we were away before 7am and, just over an hour later, tied up alongside the Customs at Soper's Hole on the West End of Tortolla (still in the BVI). We cleared in, slipped across to a berth in the marina on the other side of the inlet and then dashed to catch the ferry to St. Johns, United States Virgin Islands (USVI).

If you arrive in the USA by commercial aircraft, ferry or cruise ship then they grant you a temporary 3 month visa for the USA on arrival but if you arrive in a private (or chartered) boat then you must already have a visa for the USA. This can be complicated and time consuming to obtain from the American embassy back in the UK so the trick is to catch a ferry over to the USVI, get a temporary 3 month visa on landing, return back to the BVI (or where ever) and then enter with your yacht, pre armed with your temporary visa - it's quite legit doing it this way but makes the private boat immigration requirements nonsensical.

Anyway, we easily got our temporary visas, had an excellent lunch of nachos and fajitsas at a restuarant in the capital of St. Johns, Cruz Bay, whilst watching a metre long iguana stroll across the town square then up some outside stairs towards somebody's apartment - he wasn't tame!

We had a few drinks at the coconut bar where you drink fresh coconut juice out of it's shell spiked with the liquor of your choice - rum of course! Back on the ferry to Sopers Hole for a fresh lobster dinner at the Pusser's restaurant.

Tuesday, 29th November and off at 7am to the Spanish Virgin Island of Culebra, part of Puerto Rico. It was 35 nautical miles (nms) and we arrived about midday, anchoring at the tiny Isla Cubreta off the beautiful Tortuga Beach. However, the northerly swell was too uncomfortable so we moved on to nearby Puerto Mangar on the main island for lunch. A pretty bay, tucked in behind reefs, lined with mangroves but the water wasn't clear. Later we motored up the Ensanada Honda and anchored off the capital of Culebra, Dewey. I shall list and describe the various places visited in my time in Puerto Rico later but for the moment I'll not describe places.

Thursday, 1st December we left Culebra and sailed across to the Marina Puerto del Rey, www.puertodelrey.com on the East coast of Puerto Rico. Booked ourselves in for 3 months and the next day flew home to the UK. 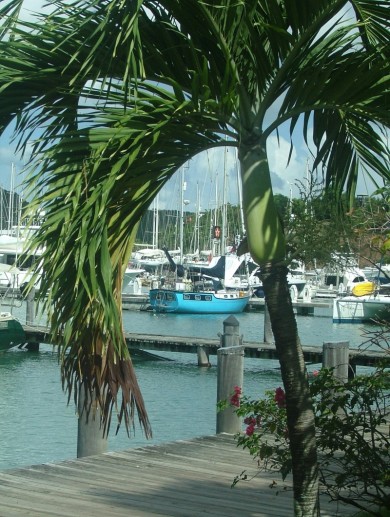 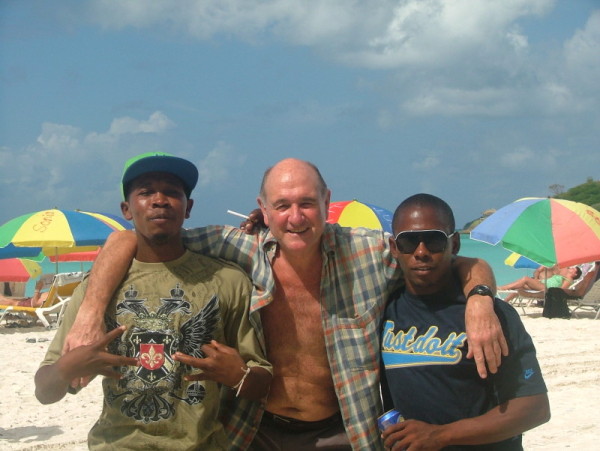 Good bye to my Jolly Harbour mates - Scarface and Toots 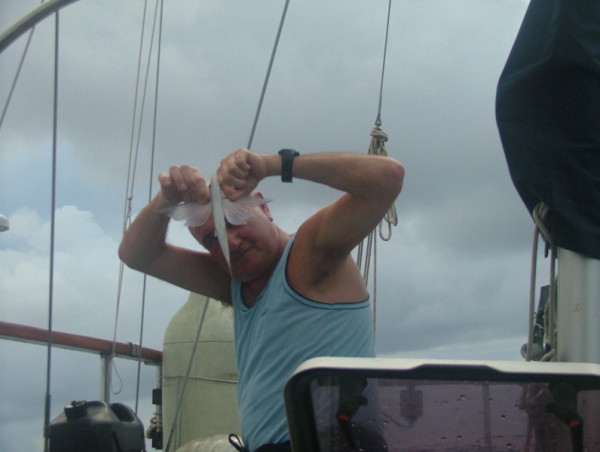 This Flying Fish landed on deck en route from Antigua to the British Virgin Islands. They actually do fly - not glide. 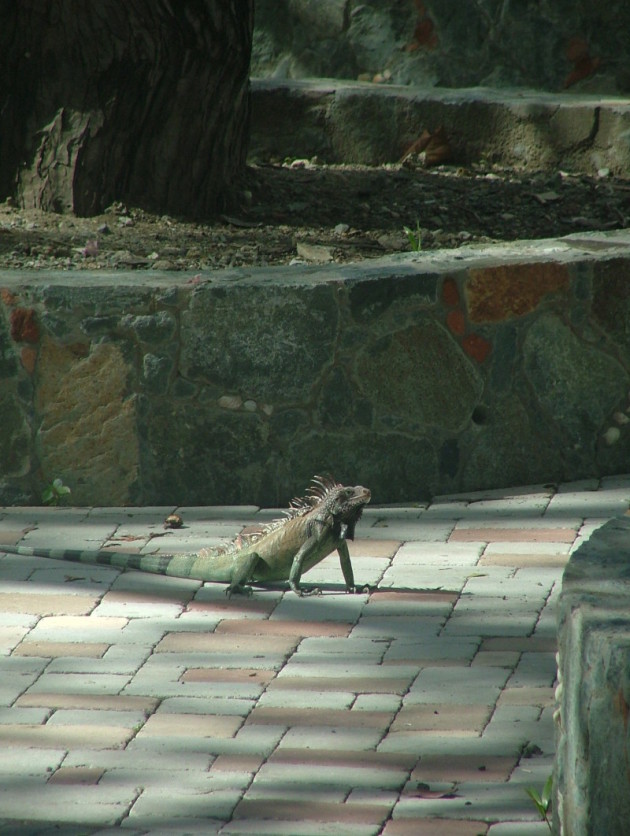 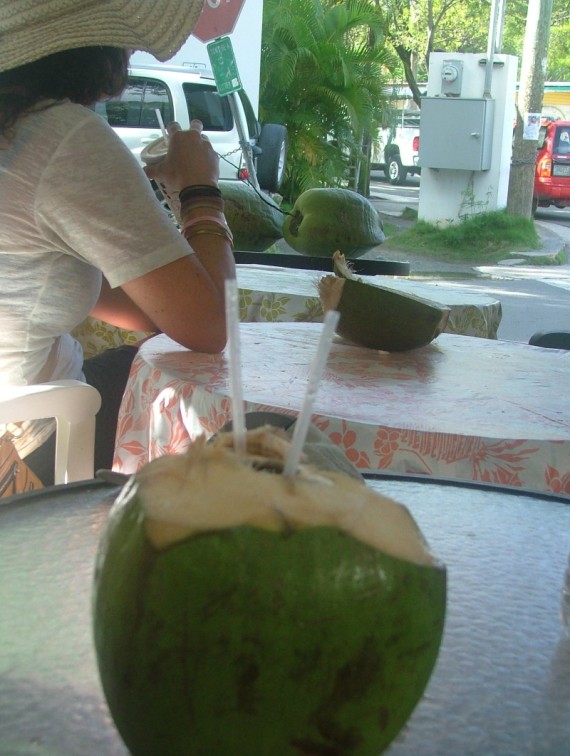 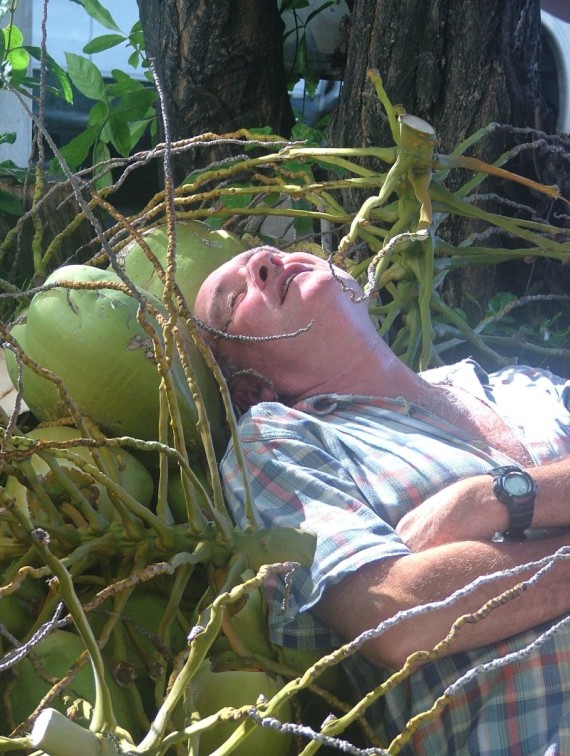 It's a bit of a knock out though