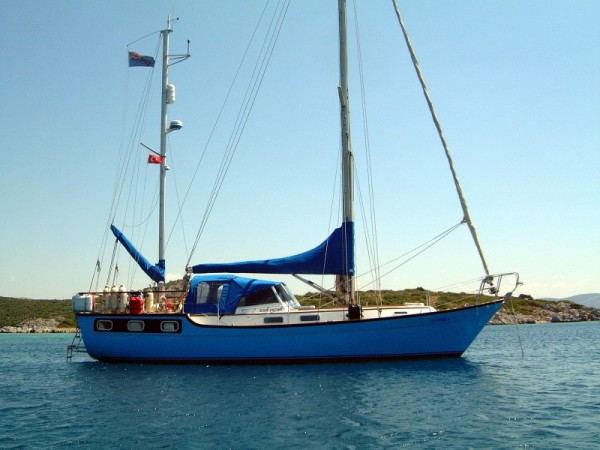 Vittoria is a 12 metre, long keeled ketch. She is a Victory 41, a rare breed of boats but much loved by serious cruisers, and she was one of the last ones (of about 100) built by Tyler Marine in 1979. They specialised in life boats and consequently the fibre glass hull of Vittoria is exceptionally thick. The interiors were always custom fitted by owners or yards and Vittoria's internal layout was designed to the original owners specification and then modified over the years by me, thus making her unique.

Over the years she has been constantly updated and now boasts a 54 HP modern Yanmar engine which replaced the previous, marinised, old ford granada diesel engine (that Peugeot originally produced for Ford before they learnt how to make them themselves).

The picture above was taken shortly after brand new teak decks were fitted and her hull was re painted in a Turkish boatyard. The old antifouling was also repaced by a copper coating system that is claimed to last for several years without replacement.

She has Raymarine electronic and Hydrovane wind self steering systems and full Raymarine electronics, updated in 2009, with chartplotter, new radar and AIS (send and receive) plus the normal range of instrumentation. No computer or TV on board but an EPIRB, SeeMe radar detector, satellite phone and self releasing life raft.

Electricity is generated by a 120 amp dynamo and intelligent charging system, a brand new Air Marine wind generator and, if required, a towing Aerogen, sea generator. All fed into a bank of 6 x 180 amp hour, sealed, marine batteries.

Below decks she has air conditioning in the aft cabin and an Ebersbacher central heating system throughout. She has two fridges - one for long passages which is a top loading, customised, keel cooled fridge and another front loader which is used more in port and on short passages. She has a watermaker, 2 x 80 gallon fuel tanks, a 108 gallon water tank and a 40 gallon holding tank.

Two double berths (the large aft cabin one converts to a dining table in colder climes), and 3 single berths.

In hot climates all dining is done in the spacious cockpit which, as you can see from the photo above, can be completely covered in canvass and clearview to keep out the rain or by mosquito netting to keep out the flying pests. In good weather the canvass panels can be raised and modified to form a bimini or completely removed, leaving just the glass windscreen.

In the picture above the boom of the mizzen sail has been cocked in order to provide full leisure use of the poop deck at anchor or in port. When upwind sailing I never use the mizzen as it is a difficult sail to "set and leave" when the main is up and spilling wind on to it. However for downwind sailing or when a gale is blowing I always drop the main and rely on fore sail(s) and mizzen only. In light winds I use a cruising chute and don't carry a spinnaker and for true downwind sailing, as on the Trade Wind passage, I fly two, poled out foresails for days at a time.

I am, of course, in love with my boat and we have owned her for over 22 years.

If you would like to see pictures and information regarding Vittoria' Scottish base in 2013 then click on Craobh Marina in top, right hand panel