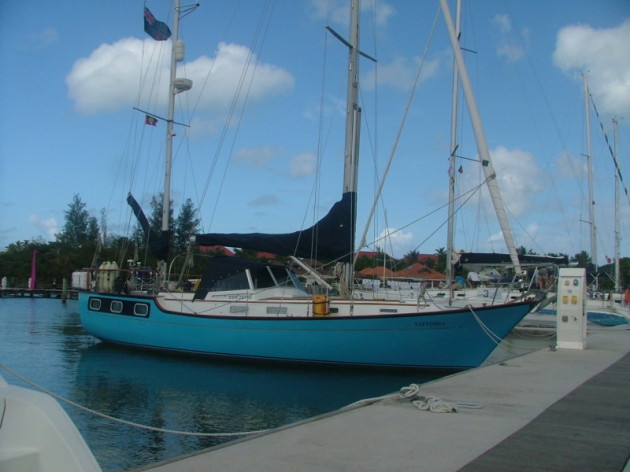 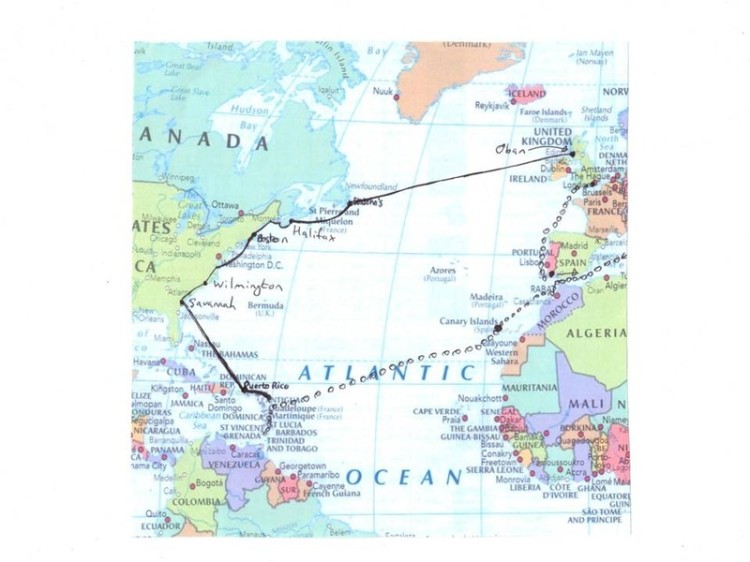 Dotted line denotes route from UK to Eastern Med (Turkey, Greece and Croatia) and then to Guadaloupe, in the Caribbean, via The Canaries. Hard line denotes this passage.

I have been sailing our yacht, Vittoria, for nearly 25 years and in this time have covered over 100,000 nautical miles in her. In previous years I had always sailed out and back to the UK within a year but, in the early Spring of 2007, sailed out with only an initial voyage plan and no plan for Vittoria's return to the UK.

My wife, Estelle, has a full time job and so she joins me when I am cruising an area but she cannot afford the time for passage making. I spend about a third (sometimes more) of my time on the boat either cruising, passage making or on maintenance. I have single handed from Antigua to the Azores and Falmouth to the Algarve but I mostly passage make with freinds and family or volunteers from the Cruising Association or Crew Seekers (a kind of dating agency putting skippers and potential crew in touch with each other). All of my American and Canadian crew were from Crew Seekers who now have a big international prescence.

On this voyage, I single handed down to the Algarve but was joined by, typically, 2 other crew for the other legs to Turkey.

The first couple of years were then spent in the Eastern Meditteranean cruising Greece, Turkey and Croatia but at the end of the third year I sailed to the Caribbean via the Canary Islands making the first landfall in Guadaloupe, in the French Caribbean. During the next two years we cruised the Caribbean from as far south as Grenada to St. Johns, US Virgin Islands, in the north.

Last year my wife proclaimed she was getting bored with the Caribbean (in fairness we have had 6 sailing seasons in the Caribbean over the years) and, although I reckon it's the best place in the world to have a boat, commenced planning this passage.

The passage follows the best of the seasons, departing Antigua at the end of the Hurricane season, spending 3 months based in Puerto Rico, an island we had no knowledge of, cruising to the Carolinas for the early Spring before things get hot and sticky there and cruising America's Intra Coastal Waterway (the ICW) that goes inside the islands and Atlantic Ocean from Florida to the Chesapeake Bay. We are then based at Boston for the early summer nearby to Nantucket and Cape Cod, before heading to Novia Scotia, Canada for the summer. Late summer I plan to sail back to the UK to Oban in the Western Highlands of Scotland via St. Johns in Newfoundland. For 4 days we will be sailing the wrong side of the "mean southerly limit for icebergs in September" so I'm hoping to see one of these amazing creations en route - but not do a Titanic!

This passage commences in November, 2011 and, 6,500 nautical miles later, finishes in the Western Highlands of Scotland by October, 2012. I will have had 12 different crew on board, from 20 years old to 66 years old and from the UK, America and Canada.