A retired professor and ex. commodore of the local Conception Bay yacht club, Frank O'Connor, came to the quay and offered to help me provision with his car. A foodies dream come true. Fridge now crammed full of moose pie and sausages, seal flipper pie, sausages, and frozen flippers, and arctic hare. Went into an amazing fur shop in town. See www.naturalboutique.ca. Estelle would have gone wild. Beautiful sealskin boots and gloves. Stylish jackets and hats in sealskin, bluefox, arctic hare, etc. In the evening went to an excellent Newfie (the local name for Newfoundlanders) folk music event at The Ship pub.

Art and Denise are on holiday here for a week and Art's been getting me 5 gallon cans full of water for my tanks. Extra diesel is being delivered by tanker to the quay. No icebergs in the vicinity but hurricane Nora to the south of us near Bermuda - hopefully diminishing. Lots of trees down here from hurricane Leslie last week. We are the only yacht in St Johns, dwarfed by the merchant ships around us.

Wind WSW F4. 1665nms to Scotland and sailing well. Cloudless day. Petrels, fulmars and puffins back. We are sailing over famous cod fishing grounds, the Grand Banks. The cold Labrador current, from Greenland, has plunged the sea temperature to 4C and made our breath steam last night. Moose pie and seal flipper pie for lunch yesterday. The flipper pie was like herring and Cindy revoked. Artic hare casserole made a good dinner though. Saw our 2nd "green flash" at sunset. This far north they are small but in Key West they are larger and a popular tourist attraction.

Wind WSW F3. Motoring, sunny, cold nights. 1545nms to go. The cold sea encourages marine life and we can see 20/30 fulmars, petrels and manx shearwaters. They spend most of their life at sea and have a nostril above their bills through which they excrete excess salt. The petrels that hit the canopy regurgitated tiny shrimps. Had seal dogs (hot dogs) and moose dogs for lunch yesterday. Seal dogs were better than flipper pie, they were like a non-spicy merguez.

Wind SW F5/6. Sailing along at over 6 knots. 1412 nms to go. Sunny day and sea temperature has gone up by 8 degrees to 12C now we've come out of the Labrador current. Warmer nights.

Yesterday - whales blowing in distance. A 2 mile long shoal of a few hundred dolphins passed ahead of us. A large tuna leapt close by so we put fishing lines out and, within seconds of each other, caught a 45lb and a 40lb tuna. Hooked at 8pm, it was 10pm before we got them onboard and bagged up in fridge.

Wind NW F4. Overcast. Sailing over 5 knots. 1278 nms to go. As we filleted tuna 2 nights ago we ate the cheeks and other choice bits raw but revoked when Dan cut out an eye for us. We grilled ourselves tuna steaks after and last night had tuna korma with raw tuna cerviche as a starter - which was great.

Overnight wind WNW F6/7. Double reef main & jib. 1143 miles to go. Sea temperature dropped to 7C as sailed into East Greenland current. We'd hung strips of tuna out for drying and about half of the one hundred or so have dropped off. Chefette Megan did an excellent Cincinatti Skyline chilli last night.

Wind WNW F5/6. Misty and wet. 1002 nms to go. Sailing 6/7 knots. When the water warms the birds nearly all disappeared. Now it's gone cold, 6C, they're back. Lots of shearwaters and spectacular skuas with white wing bands flying close to the boat. Dan did salmon chowder for lunch yesterday and I did sweet and sour seal flippers with tuna cutlet starter. Dan's chowder was great. My flipper was rated ok. It was like 4 quarter size shoulders of lamb. I was suprised about the bone structure and the size indicated a seal pup - not very PC!!!. It was like a fishy tasting steak or liver. The girls were allowed to use hot fresh water to shampoo the "crusties" out of their hair.

Rough. Wind NNW F6/7. Last 24 hours averaged 7 knots boat speed with 3 reefed sails. Girls had sleepless night in aft so now hot bunking. 835 nms to go. We're over half way across and only seen 1 other vessel, 7 miles away, in 7 days. Tuna mayo for lunch yesterday.

The calm before the storm. Large swell, little wind but gales forecast for tomorrow onwards. 585 miles to go. Baking extra loaves for the gale - 3 done, 1 to go. Bedding hanging out to dry in final attempt before gales. Tuna melts for lunch yesterday. eta Eigg Monday am.

Gales overnight gusting storm Force 10 this morning. Pretty large waves have broken over the beam so far causing chaos. The spray hood burst open and studs were broken when a wave hit. The canopy side panel u/s and another one going. The cockpit has been awash with phosphorescent sea water which has washed over below decks. We're now only flying the storm jib - all other sails taken down. We're all soaked but the barometer is starting to climb. Three of us are still in good spirits, the other - sometimes grinning, but bearing it. 310nms to Eigg. eta due Sunday night.

Massive seas yesterday with spume flying off the tops of the waves. Fulmars loved it. A wave washed over me as I was putting up the storm jib - with Megan. It caused my life jacket to auto inflate - that hardly helped mobility! About 20 or more large waves crashed over the boat. The fender and life buoy holders were both swept off. A wave made its way below decks before we closed the hatch doors. All the cupboard doors flew open on the impact of one wave. A teak oil container flew out of one cupboard and broke on the floor of the aft cabin where the girls are. I overheard Cindy say to Megan, in her American way, "this is sooo out of my range. All my clothes are soaked, beer bottles are crashing across the floor and everything is covered in teak oil!". Things could only get better, and they did by morning.

We beat the gale into Eigg and tied up in the ferry dock overnight. In the whole crossing from Newfoundland we've seen only one other vessel. We had a fantastic welcome at the ferry dock. Megan has many good friends on Eigg and they came down to cheer us in and Donna the piper bagpiped us in. All very moving. Strong winds forecast, but no gales for today so off to Craobh marina via Loch Aline for tonight. Megan's mate, Tasha, has brought a lobster, 2 crabs, 2 haggis and veg for Dan and I to eat en route and the girls are both busy trying to sort out immigration problems with Glasgow airport. Eigg is a beautiful island. Looking out of the cabin window at an eider duck I saw a seal pop up and beyond hairy cows are grazing the fields. The whole island is dominated by the spectacular "sgurr" - a mountain that sticks up like a thumb.

Departed Eigg yesterday at 1430 after Dan and I stuffed ourselves with the great local crab and lobster that Tasha had supplied us with. After many hours of phone calls, emails and faxes, Megan had finally been granted entry permission and was in a highly emotional state. Last time she had not been granted entry and had been put on a plane back to the USA. Megan, Cindy and Tasha joined us for a farewell drink and Donna the piper turned up again to bagpipe us off. Very moving. Strong, adverse tides and headwinds made for very slow going and it was not until 2200 that we tied to a buoy in Loch Aline after fractionally avoiding colliding with another moored vessel in the pitch black. Dan served us two each very strong rum grogs to calm our jangled nerves and at 23.00 we ate Tasha's haggis and neeps. Off at 0700 this morning in squally showers for our final leg to Craobh marina and then home.

Arrived back home 1.30 am Wednesday.

Art took this photo as we sailed off from St. John's. 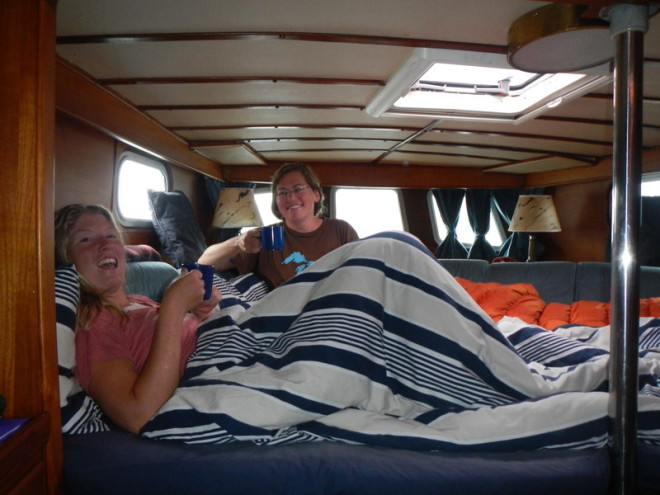 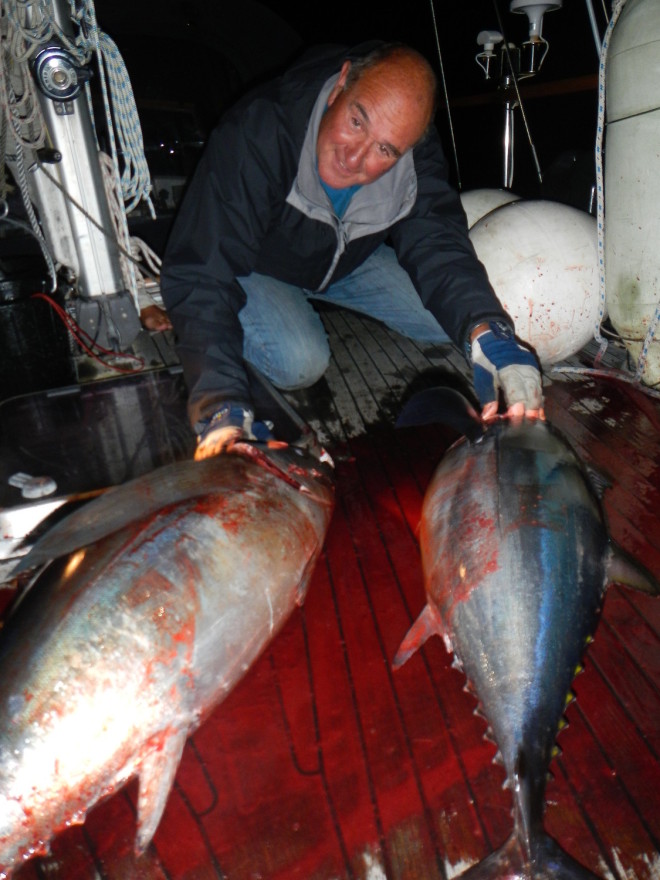 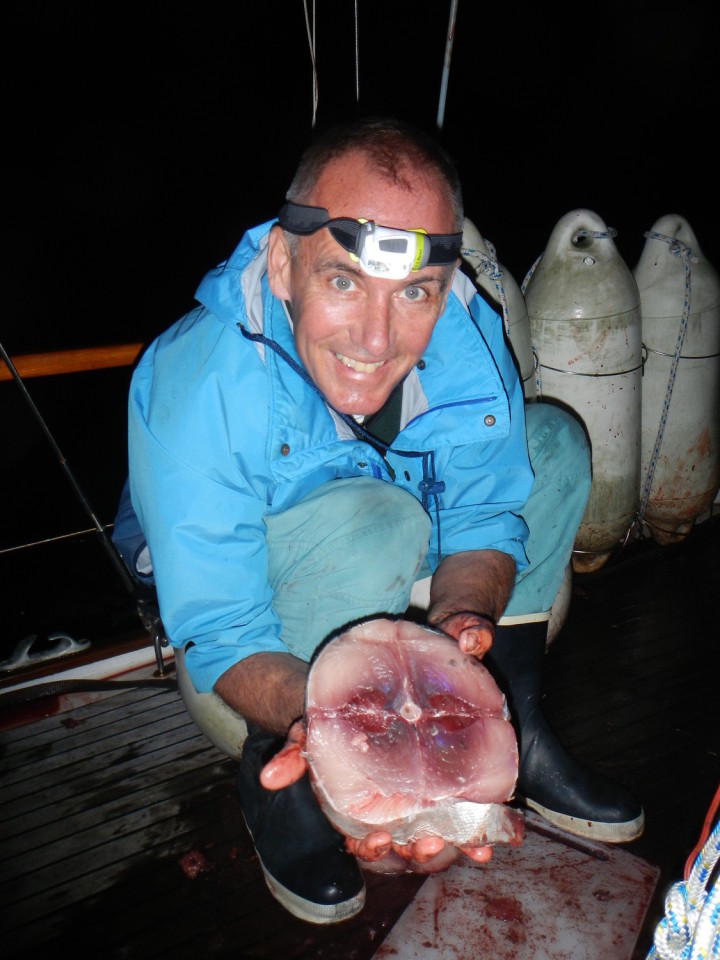 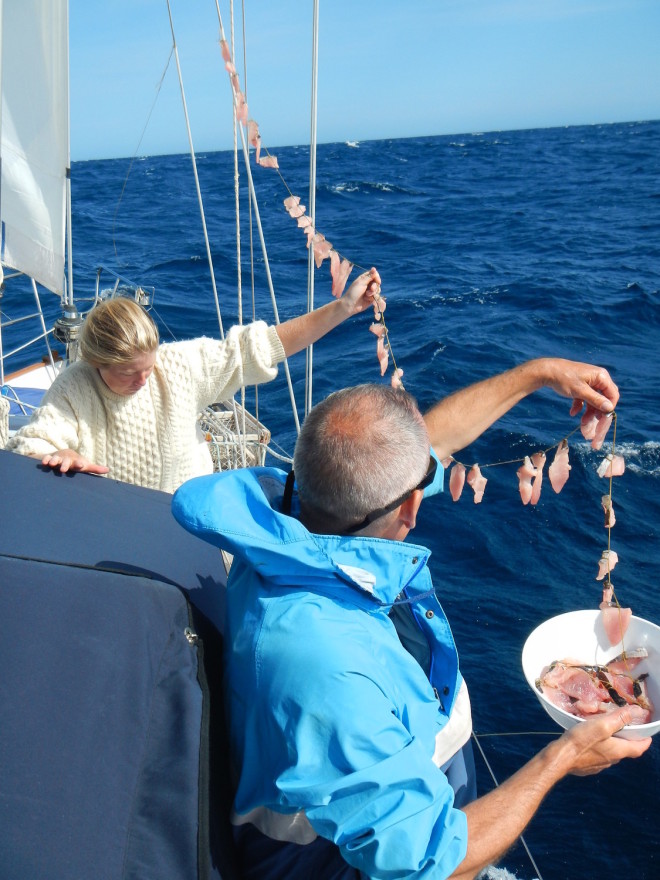 Hanging out strips of fresh tuna to make "tuna biltong" 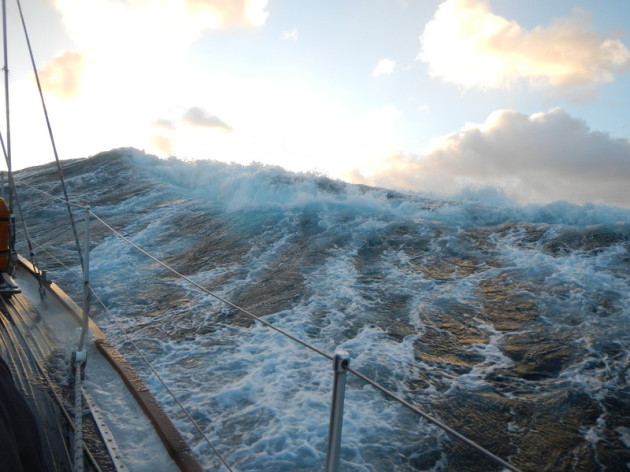 When the gales came we had very troubled seas (possibly left over from the recent hurricanes) with over 20 large waves breaking over the boat. 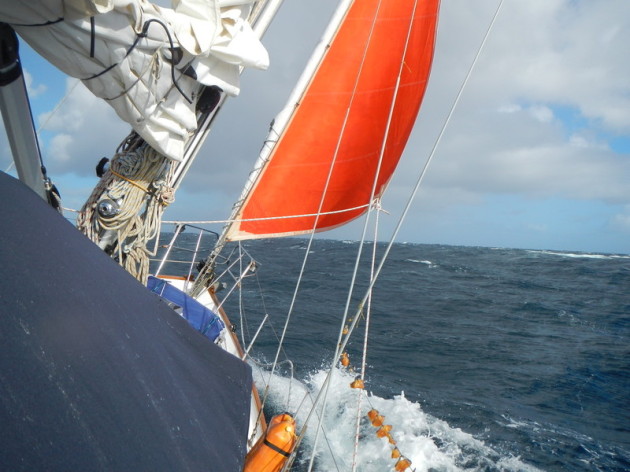 The gale has now subsided. For 2 days we sailed on only the storm jib, regularly exceeding 8 knots - pretty impressive for a 12 ton, 40 foot, long keeled yacht. 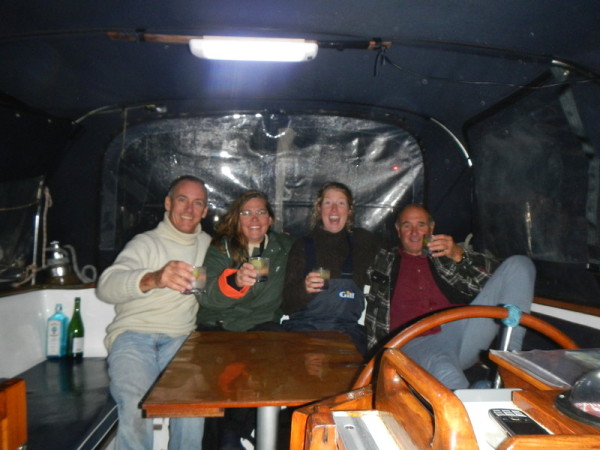 From left, Dan, Cindy, Megan and I celebrating our safe arrival in Eigg - with Gin & Tonics - of course!

Megan and Cindy are keeping a log of their travels which gives another, very interesting perspective of the voyage.

Megan, Dan and myself were all pleased that we had had a "proper" Atlantic crossing with gales and very rough seas. Cindy, who had only come because of Megan, hadn't wanted such a crossing and wouldn't do it again but, given her retiscence, she had done extremely well in conditions that would have severely frightened a normal person.

I have had other crossings with stronger winds but never experienced such continually rough seas as we had towards the end that regularly swept the decks and damaged equipment, sprayhood, side panels etc.. However, at no time did we feel un safe in Vittoria and she coped very well with the conditions. We mostly relied on the Hydrovane self steering but when it got very rough it stopped holding the course well but then the Raymarine self steering managed to hold the course pretty well. On arriving in Craobh Marina I found that a part had worked loose on the Hydrovane and I think that if this hadn't happened it would have coped well.﻿

It was a great voyage covering 6500 nautical miles between November, 2011 and October, 2012. Puerto Rico and the Spanish Virgin Islands were relatively undiscovered with lots of beautiful, isolated anchorages in the islands; the Intracoastal Waterway in Georgia and The Carolinas was full of wonderful nature (eagles, alligators, terrapins, dolphins and lots more) plus great seafood; Cape Cod was beautiful with lots of history (for America!); Nova Scotia was wild and unspoilt and we caught our own lobsters and fish; our final, rough passage across the Atlantic was memorable and finally arriving in the grand scenery of the Western Highlands of Scotland capped it off perfectly. Next year, from our Scottish base, we hope to cruise the Caledonian Canal, Orkney, Fair Isle and Shetland and then the Hebrides.

If I had my time over again I wouldn't change the route and my only regret was not having had enough time to cruise Maine which I understand is another great cruising ground.

From Cape Cod northwards I was amazed at the abscence of any foreign boats.﻿