Scroll down for charts, photos and sailing guide.

From my experience so far of Puerto Rico, it is quite a unique cruising ground.

In the nearby string of islands from the British Virgin Islands in the north down to Tobago in the south there is generally something going on ashore no matter what the size of the bay. You'll always find bars open and places to eat and ashore it's quite often pretty ethnic. On the other hand it's not always easy to provision and the meals ashore can get a bit samey. There are generally lots of long term cruising boats and people on holiday in chartered boats and it is very exceptional to find an anchorage to yourself.

Puerto Rico is quite different. My marina, at Puerto del Rey, advertises itself as the largest in the Caribbean. It has over a 1000 berths in the water and storage racks ashore. However, when I arrived I was told the bar only opened at weekends. When I asked where I could find a bar I was told they were all a drive away. The only meals you could get during a weekday were from the tiny supermarket / deli in polystyrene containers. The boats in the marina were mostly mega motor cruising/fishing boats with few cruisers and only a couple of charter boats. In short it was a pretty sterile, boat parking lot.

When you cruise the main local Spanish Virgin Islands of Culebra and Vieques (part of Puerto Rico) you find lots of beautifull, sheltered and empty anchorages and although each island has one reasonable bar/restaurant location, outside of this most bays are devoid of any bar or eating facility or mostly any sign of habitation.

I think the reason for this is twofold. Firstly, few foreigners cruise this area and cruisers keep to the popular Caribbean Islands in the south - the mainland itself has few tourist locations either. Secondly, the population is American (although Spanish is the main and sometimes only, language). This means the locals have few holidays during the year, work hard during the week and only use their boats to "get away from it all" on the weekend. It is the land of the large malls and highways - no paths to walk on! When they do motor out in their boats they like congregating in the same bay together. I was once moored to the only buoy in a beautiful bay on my own and looked across to a bay a few miles away that had about 30 boats in it, some in rafts of half a dozen boats or so and with their music blasting away. When boats come back to the marina you can hear them coming from a long way away as they play their on board music systems at a deafening level.

Double click on the following to load "Roger's Sailing Guide to Puerto Rico and the Spanish Virgin Islands". This is a free standing document aimed at people who might consider cruising the area. The introduction duplicates some of the above. Takes a little time to down load. 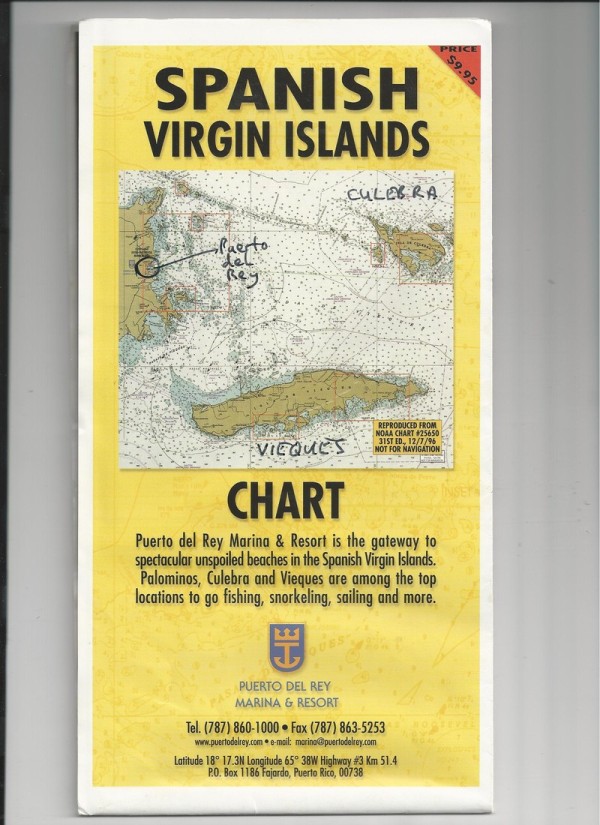 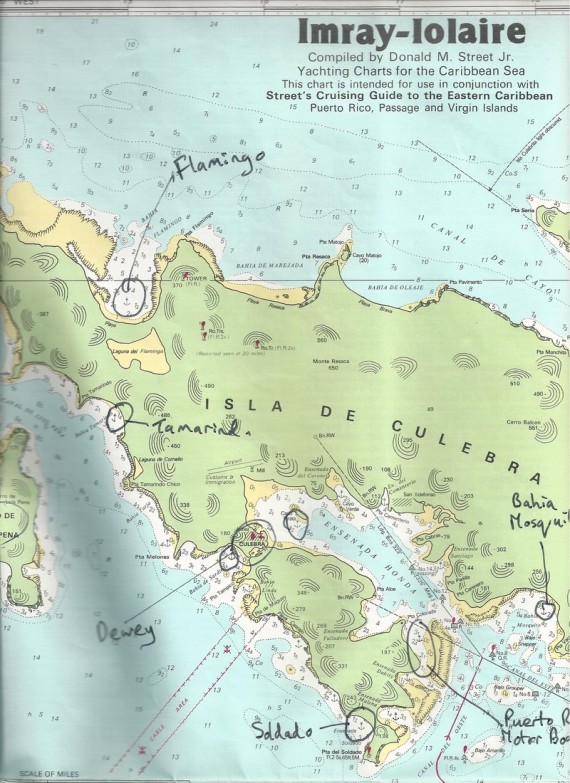 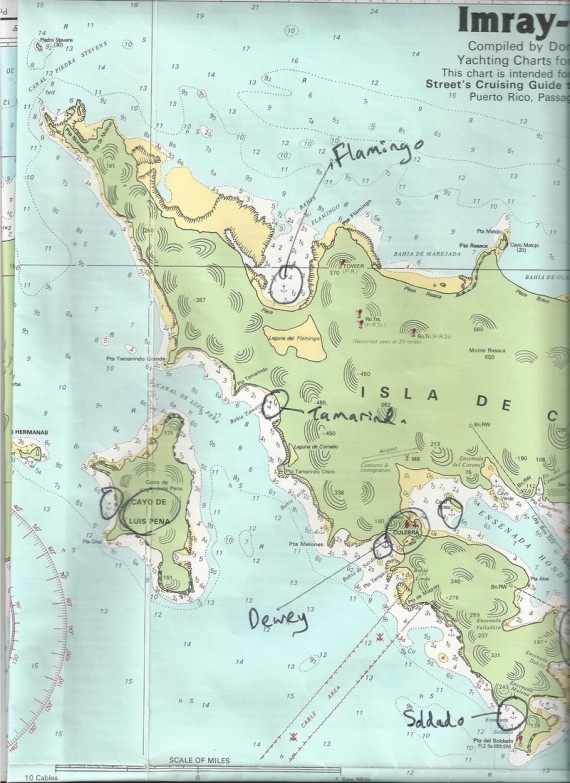 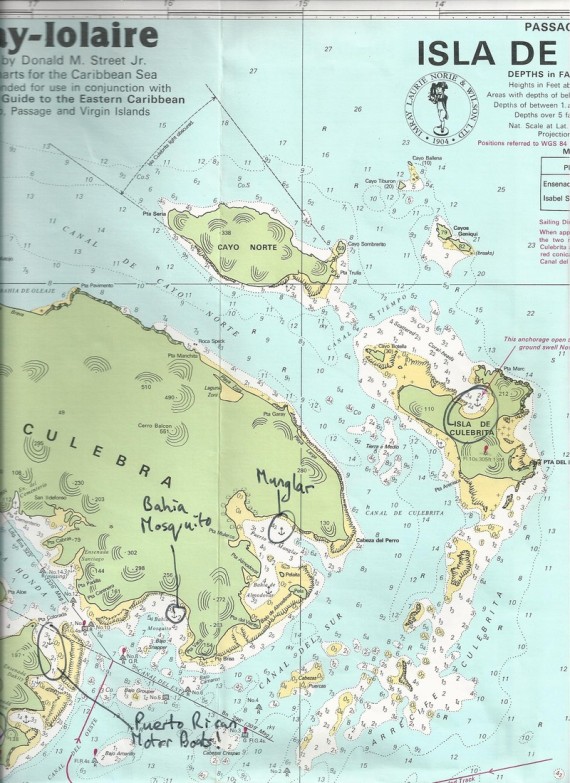 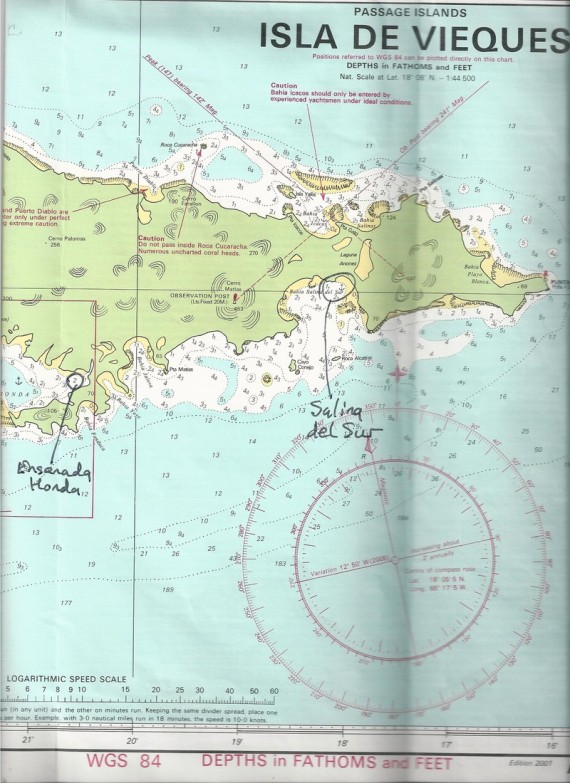 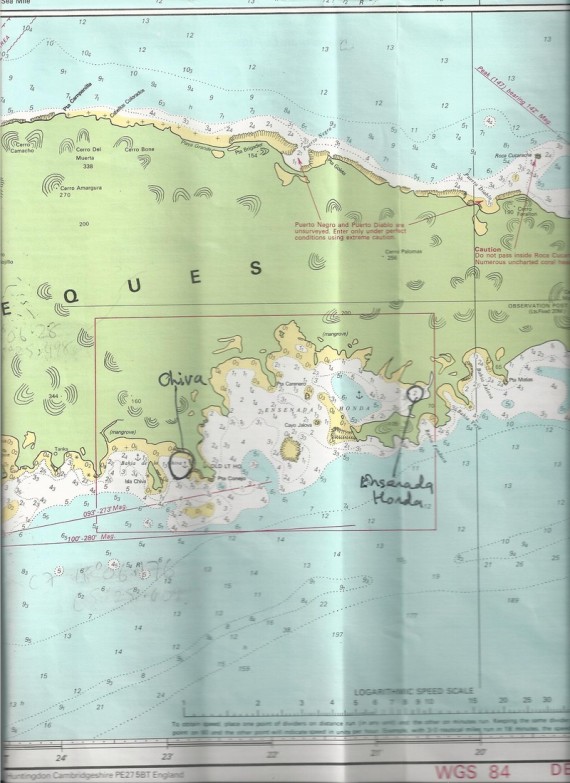 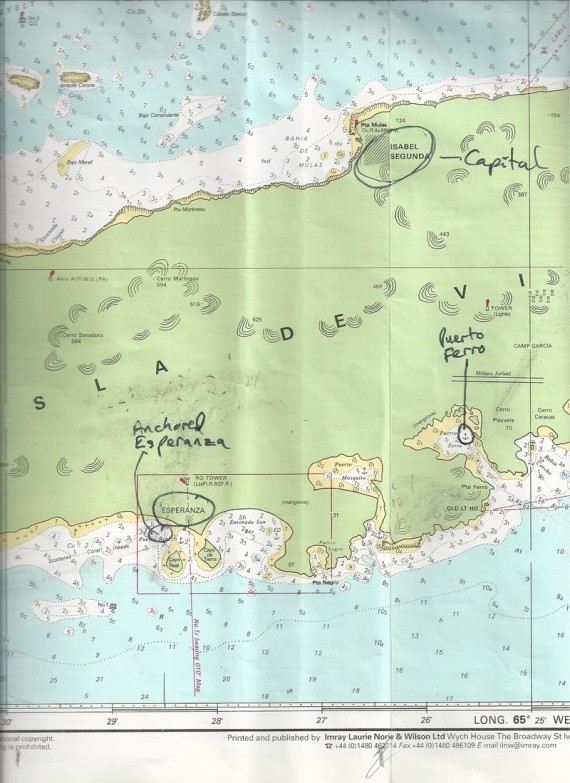 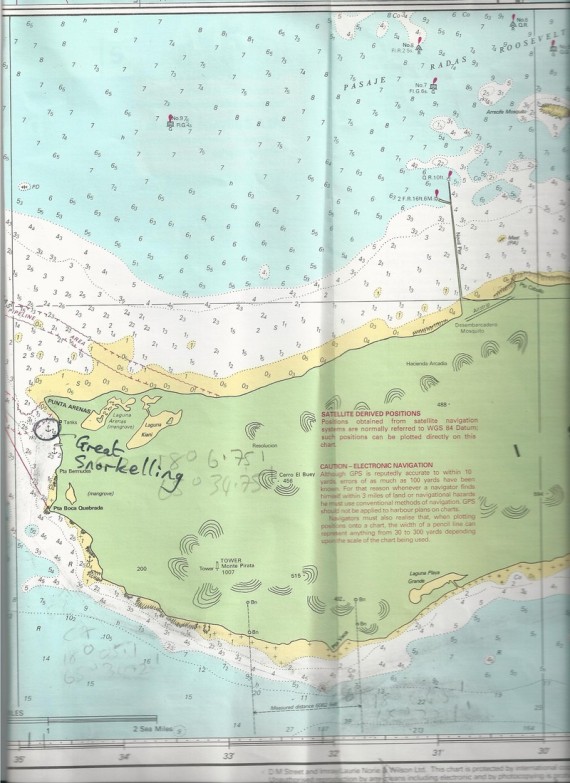 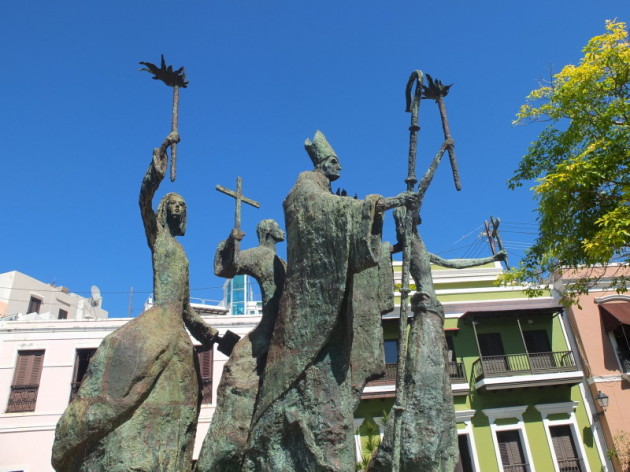 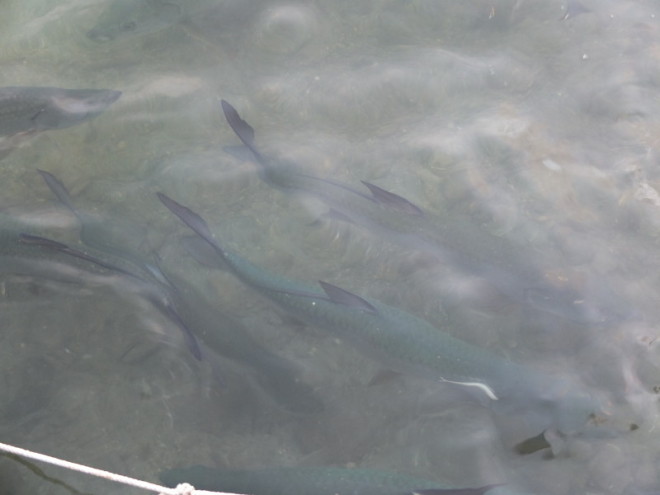 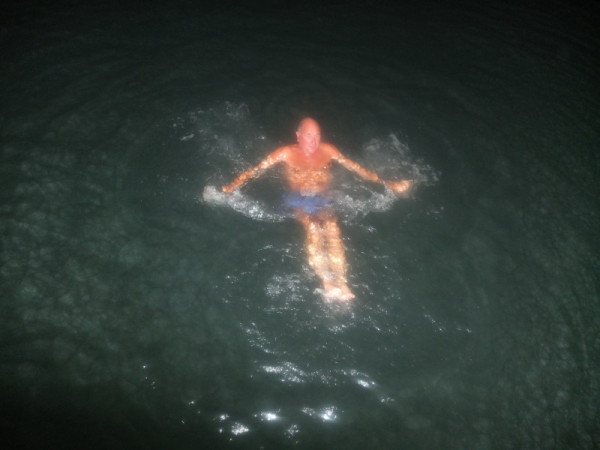 Swimming off Vittoria at 4am (after the moon had set) in a bio luminescent bay in southern Vieques, Spanish Virgin Islands. The camera flash detracted from the actual luminosity as would the moon if it had been out. The effect is caused by dynoflagellates - micro-organisms, living in the water, that glow in the dark. Puerto Rico is one of seven known regions for them world wide and considered among the brightest and the best 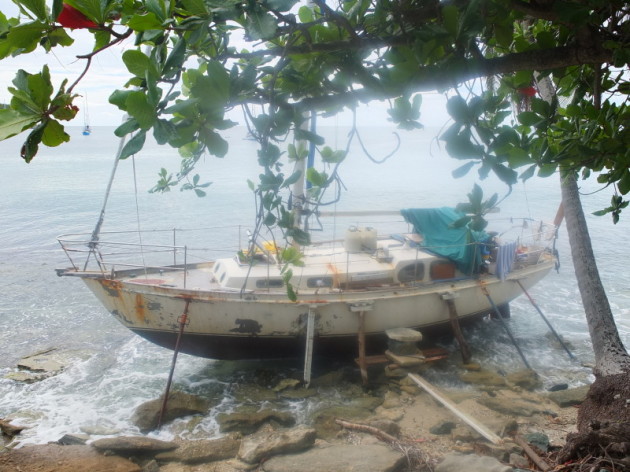 This yacht was swept ashore and wrecked in a storm but not abandoned. The owner still lives on it! (Vittoria at anchor, top left) 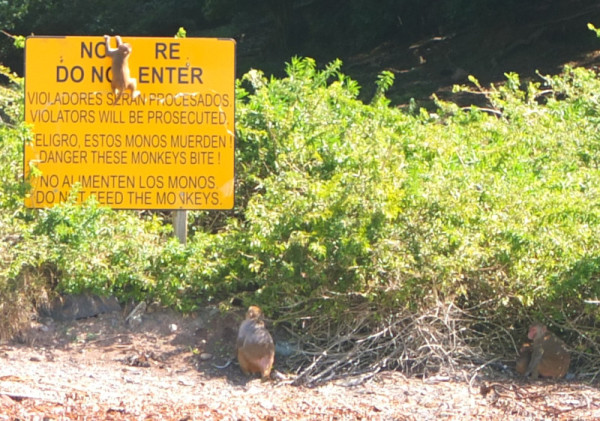 Monkeys ashore at Cayo Santiago or Monkey Island, off the east coast of Puerto Rico. In 1938, 500 Rhesus monkeys were let loose here for research purposes. Visitors are not allowed but if you anchor off shore and blow your fog horn they all appear in the trees and come down to the beach. 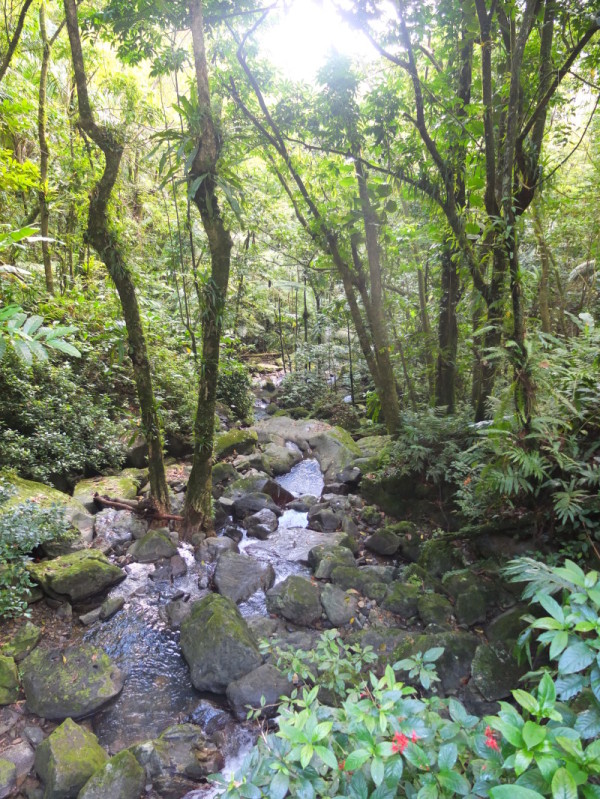 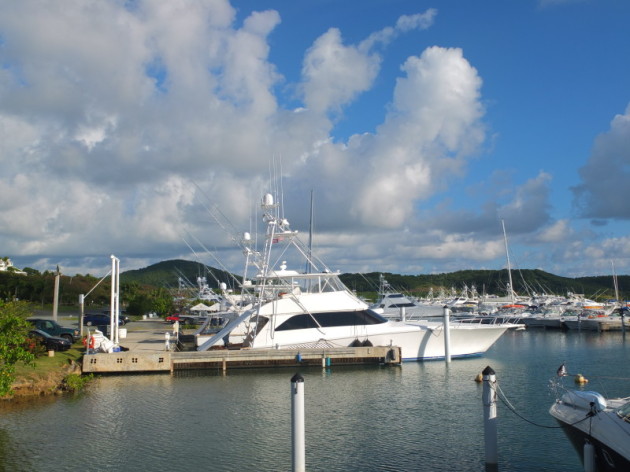