I fly out to Halifax on Wednesday, 22nd August to get the hull cleaned and do general maintenance. Estelle flies in on the Saturday and then we go "gunk holing" the Novia Scotia inlets for 2 weeks before Estelle leaves and my Atlantic passage crew join me. If you don't know what gunkholing is then google it and look for example at the wikipedia definition. It's basically cruising remote areas and dropping anchor in shallow areas and coves that take your fancy.

Estelle flew in and we chilled out for the weekend. On Monday Estelle did an award presentation at her company’s Halifax office and then we headed off to Cape Breton in a hire car to do the spectacular Cabot Trail around it's Northern Highlands. Fish chowder, steamed mussels, snow crab and lobster at Baddeck Lobster Suppers that night. Lobster linguine at Seascape Coastal retreat Tuesday night. Lobster stew and snow crab sandwiches for Wednesday lunch at The Clucking Hen Café, North Shore, on the road back, a McLobster at McDonalds and, finally, more lobster and snow crab back at the boat freshly steamed from Sobeys supermarket. Live lobster abound in Nova Scotian waters, snow crab are caught 5 miles offshore and we’d done ourselves proud.

On Tuesday we’d walked the 5.4 mile Arcadian Trail and got within 50 metres of a spectacular moose (see photograph) and on Wednesday we walked 4.6 miles up Farey mountain and then a 2.4 mile headland walk. All fantastic scenery but we were massively stiff afterwards. We had been told the Cabot Trail was a ‘must see’ and it was. We’d seen eagles, spruce grouse, chipmunks, pilot whales, giant cormorants (twice the normal size) and a tiny pygmy shrew as well.

Slipped off in the morning, 26 miles south to Rogues Roost a fantastic anchorage to the north of St Margaret’s Bay. On the Cabot Trail I had bought a full size, second-hand, lobster pot for $7 and that night we baited it with mackerel and dropped it down.

Caught 14 small mackerel on feathers (I ate 7 and Estelle 5 for lunch) and to my absolute amazement there were 3 lobsters in my pot. The smallest 1 lb and the largest over 2 lb. We gorged on them in the evening (boiled in my Southern States, Old Bay seasoning).

Amazingly we had another 3 lobsters in the pot this morning! Estelle says that she’s not eating anymore! Off to Big Tancook Island but wind in wrong direction for anchoring so on to anchor in the creek near Mahone Bay village, famous for its iconic 3 churches, a Presbyterian, a Lutheran and an Anglican one, all within a few yards of each other and one of the most photographed scenes in Nova Scotia. It’s a very pretty traditional, but small, community but its still got a further 3 churches!

AIS not working. Took it apart looking for fuse. Couldn’t fine one. Put it all back together and it worked. Late away to Chester so dinner ashore tonight – not lunch as planned. Route took us weaving very close to pretty islands and shoreline. Estelle nervous on helm to start with but gained confidence. That night ate at The Foc’sle – Estelle unimpressed but Canadian IPA was good – we normally drink Alexander Keith’s IPA which is very popular here.

Off to Big Tancook island, an hours motoring away. Dolphins, seals, little auks en route. Sea only 9 degrees C. Took about half an hour to get mud off anchor and chain so it was a relief to anchor for the day on a rocky / gravely bottom in North West Cove. Tancook is a lovely island about 3 miles long and 1 mile wide. Lobster fishing is its only industry but the season here ended in May and doesn’t start again until Fall. The permanent population is 100 souls rising to 220 in the holiday season. Pretty, large plots are dotted around the coast and each owner is very jealous of their property rights with “No Trespassing” signs everywhere. We walked around the island spotting lots of blue jays and even humming birds soon to migrate to Mexico.

We took a picture of a large muskrat swimming with a bundle of branches in its mouth in South East Cove pond. On a trail through the woods we came across large green frogs with big brown spots on their backs, and small voles scurrying away. We emerged into clouds of tortoiseshell butterflies. Lunch on board and then motored off to Mason Island. A bit barren when we got there and another yacht just bagged the best spot before us so we pressed on to Covey’s Island, 9 miles total distance from Tancook. Much prettier island to ourselves and down with our lobster pot again. Fine dining on board that night – lobster cocktails (1 ½ lb lobster each!) followed by rib eye steaks with roast squash, mushrooms fried with onions – perfectly cooked by Estelle. Sauvignon Blanc to start and Merlot to follow – of course!

Hauled up the pot to find I’d caught 2 more lobsters – one well over 2 lbs. That’s 8 to date – amazing, the sea floor must be covered with them. Off to Lunenberg, 17 miles away and a UNESCO World Heritage site. A major cod fishing centre in the old days and still possessing a fish processing plant. The Old Town is an old British colonial settlement, now a national historic centre, with some find buildings dating back to the 18th century. Lots of galleries and restaurants. We ate at The Grand Banker Bar and Grill with great food (we had mussels and scallops), good service and excellent value for money by Canadian standards.

Barometer diving, rain pouring so still on buoy for lunch. Local white corn, sweeter than our sweet corn, and Soloman Gundy, a Nova Scotian pickled herring, firmer and sweeter than ours.

In afternoon decided to go back round to Mahone Bay and anchor in Heckmann anchorage but AIS not working again. Fortunately got a local electrician out to us and after a couple of hours he diagnosed that the wind generator was putting power into the mast and this power was going into the AIS’s VHF aerial (grounded to the mast) and feeding back into the AIS, causing it to shutdown. AIS stands for Automatic Information System. Small yachts like ours can have it but it’s mandatory for all vessels over a certain size and a boat with AIS will show up positioned on chart plotters with various information accessible – position and course being the most valuable.

This problem had first appeared in Puerto Rico and was wrongly diagnosed by an electrician there and by other subsequent electricians. To no avail I had taken the whole thing back to the makers in the UK for testing and replaced the VHF aerial and all its cabling!

New cable for the wind generator is required so we need to stay in Lunenberg another day and await the electrician’s return with the cable 6 p.m. tomorrow. Our eigth lobster and cod cheeks from the Lunenberg fish processing plant with linguine for dinner.

Walked the Bay to Bay Trail across to Heckmann Island, Mahone Bay. About 8 miles round trip along an old railway track finishing in the Old Town. Worth doing, lunch and dinner on boat but electrician arrived late and did not finish! 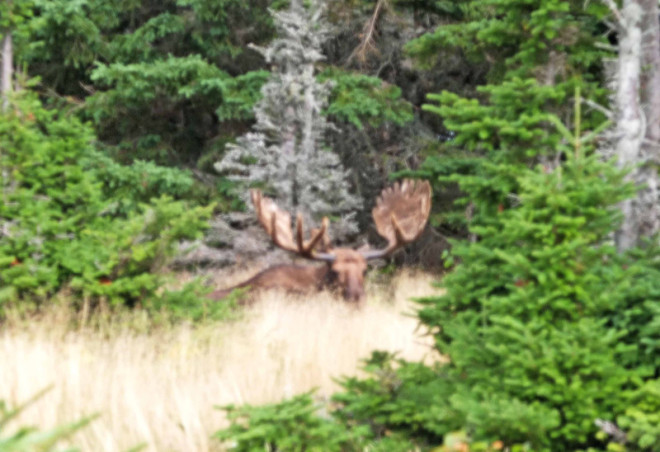 We spotted this fantastic moose  whilst walking the Arcadian Trail in Capo Breton. 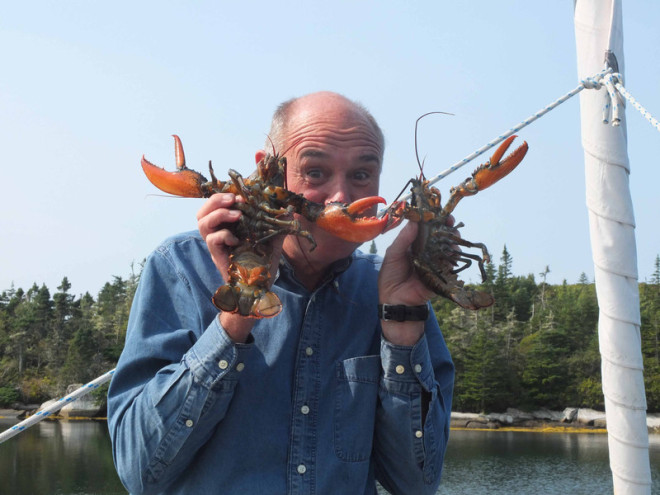 We caught some great lobsters in our own, $7, secondhand pot. 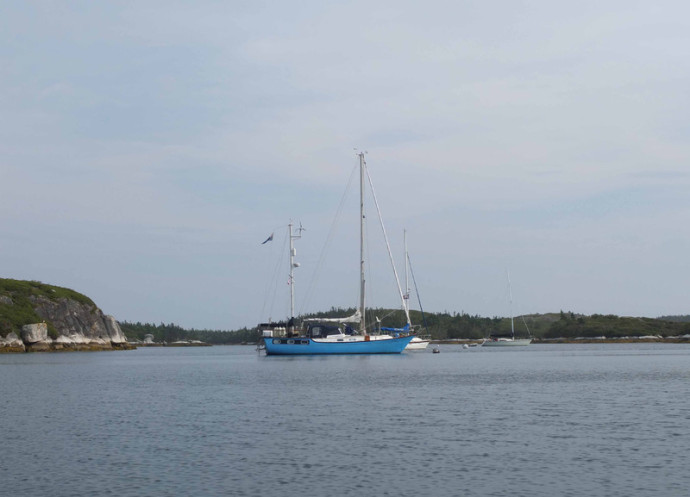 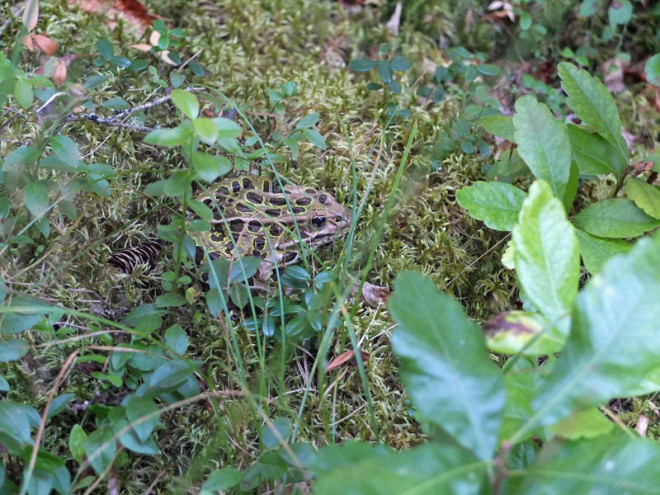 Spectacular frogs when we walked around Big Tancook Island 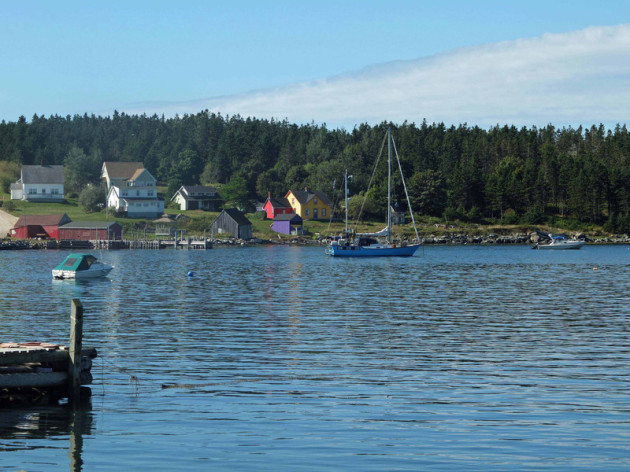 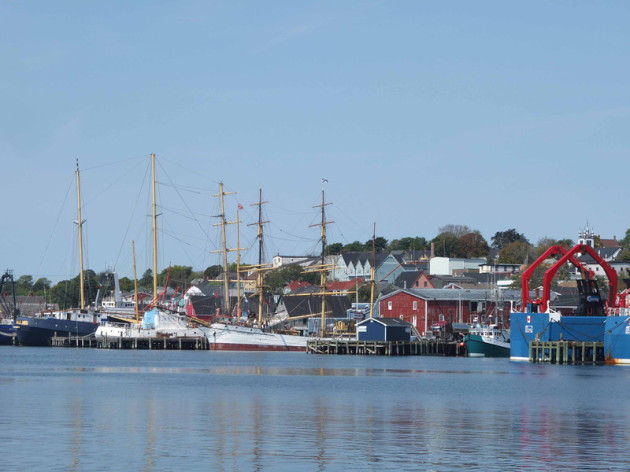