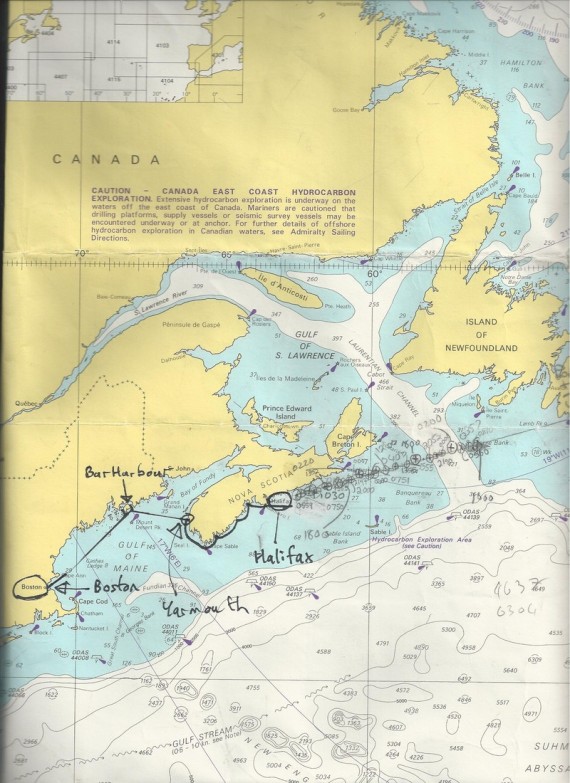 Flew in last night. Up early to get everything shipshape. My mate, Alistair, and I went off to get the repaired sails. They had been with the sailmaker for 4 weeks and despite many emails he hadn't even started them! We stood over him and helped him do the job there and then and then managed to get them installed by lunch. Eric and his son in law, James, meantime went off to do the provisioning at the nearby Stop n' Shop supermarket and by lunchtime we were ready to go. A good lunch and at 1415 we slipped for Maine.﻿

Little wind, flat seas, 176 miles of motoring and at 1645 we tied up in Bass Harbour, a major lobster fishing port in Maine. Lobster, of course, at the Seafood Ketch restaurant and then we were invited back to Sandra and Bruce's for Independence Day fireworks and drinks. They are holidaying here from Manhatten. Nearly 2 bottles of our duty free scotch later, we stumbled back to Vittoria.﻿

0800 walked to Ritchie's Lobster Pound for live lobsters ($4 per lb) and rock crab meat. Local ladies were expertly splitting the crab claws open with a chunk of granite! Departed for Bar Harbour at 0915 with Sandra and Bruce along for the ride. Very thick fog at first and Bruce sea sick and, on arrival at 1230, he stayed off the boat whilst Sandra joined us for G&Ts, lobster, white wine and finally rum - she had made a major recovery from the previous nights excessive drinking when she had even drunk more scotch than Alistair and Eric (both Scottish). Bar Harbour is a very pretty place, full of tourists, and surrounded by magnificent scenery and walking country. We rang customs to ask how we check out of America and they said "just go!". So, at 1915, we did just that and set out for Yarmouth, Nova Scotia, threading our way through thousands of lobster pots and occasional seals and dolphins. Two days ago we had seen Minkie Whales.﻿

Saw our first Puffins and at 1220 tied up in Rudders marina in Yarmouth, Nova Scotia. A basic but perfectly OK marina with it's own bar/restaurant and micro brewery. Friendly customs guys came out to check us over and then ashore.

Yarmouth's good times are over. It used to have daily ferries from Bar Harbour, Maine and Prince Edward Island in the north - but no more. The ferry terminal is closed and overgrown. The oil terminal and the hospital have also closed and many houses have been re posessed by the banks and stand empty and shuttered up. Fishing still survives with a large herring fleet and, of course, lobster fishing, which is currently out of season here.

At 2315 we slipped our berth and headed south to catch the tide around Nova Scotia's southern tip, off Cape Sable Island. The Bay of Fundy empties here and at one stage we had 4 knots of tide under us as we carefully avoided all the rips and overfalls that are notorious in this area.﻿

At 1235 we anchored for lunch behind McNutt Island in Shelburne Harbour and chilled out for the afternoon. We could smell the pines in the surrounding forest. On the way in we passed uncharted fish farms, buoys with surface nets between them and the biggest leather back turtle I'd ever seen - well over 3 metres long.

1730 and we finally had enough wind to sail for the final hour into Shelburne marina. A great dinner at Charlotte Lane Cafe - a destination restaurant with Nova Scotian wine - the red took some time to grow on you!﻿

Slipped Shelburne 0820 and off to Lockeport Harbour. Lots of seals on the way out, sitting up in the water and watching us as we sailed past. 3 more brief sitings of leatherback turtles. Arrived Lockeport 1130. Tiny marina, traditional houses and a large fish processing factory. Basic lunch at the restaurant that owned the marina and then off to Port Mouton, over 5 hours away.

We finally had a good sail on the foresail and mizzen only in a brisk south westerley. Port Mouton is a sheltered, beautiful anchorage off a pure white sandy beach with small dunes and the usual dense nova scotian forests.﻿

Anchors away 0645 and off towards Lunenberg. 1110 and dropped anchor for lunch off a white sand beach on Cap Lahavre Island. Off again at 1445.

The same weather pattern as last 2 days - cloudy, overnight and morning calms with the wind picking up at midday and finally ending with a full force 6 south westerley, bowling us along on foresail and mizzen at over 6 knots. 1810 and took last berth at Lunenberg - the vacant berth of a tall ship, Spirit of Canada. Lunenberg is a great stopover, many good restaurants, interesting museums and impeccably kept, traditional, coloured houses. The "famous" International Fisherman's Trophy winner for several years, Bluenose, was built here and due in shortly for a maintenance. En route to the supermarket and liquor store next morning we passed the house where Bluenose's skipper had lived and Bluenose museums, general stores, charity and trinket shops abound.

A late departure at 1040 and at 1310 we were at anchor off Rafuse Island in Mahone Bay. A very pretty and sheltered anchorage but a private island. Mahone Bay is an excellent cruising ground with over 300 islands in it. At Lunenburg an estate agency had half an island for sale with a large house and 9 vacant building plots for $800k.

1700 and off to Mahone harbour where we tied up at the last available berth at 1830. An attractive village with 3 beautiful churches at the head of the harbour, a few restaurants, shops and a pub.﻿

slipped at 0540 and off to Halifax and saw 2 giant Ocean Sunfish. The second one was about 2 metres long and 2 metres deep. We drifted up to it and it only swam away when we got within a metre of it. It's a rare sight and I've only seen a few in all my sailing time. They lie on the surface, soaking up the sun and feeding off jellyfish.

Berthed at the Royal Nova Scotian Yacht Squadron at 1440. We had done 569 miles since leaving Boston 9 days ago, mostly motoring on calm seas but occassional bursts of good, downwind sailing.

Crew depart this afternoon and me tomorrow evening after sorting Vittoria out and commissioning several jobs. The Hinkley boatyard in Savannah had not put the steering quadrant back properly when they'd sorted my bad leak out there. The steering quadrant had dropped and was scraping on a lower surface and it's shaft support had loose bolts. I asked the dockmaster to investigate all the prop mountings as I'd noticed unusual rattling noises on the passage.

Nova Scotia is experiencing an unusually good summer. Previous 2 years have been pretty rainy throughout but this year it has been great since about mid June and today the temperature is in the mid 30s.

I am now an international member of the Yacht Squadron (only because it gives me cheaper berthing rates that way!) and it is in a lovely location with, swimming pool, tennis, an excellent club, bar and other dining facilities. The dockmaster and his staff are also very friendly and helpful.﻿

Vittoria will be based at the Royal Nova Scotia Yacht Squadron, www.rnsys.com until Sunday, 9th September.