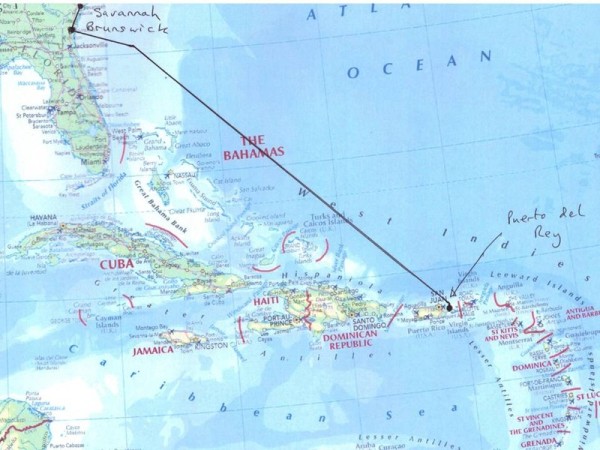 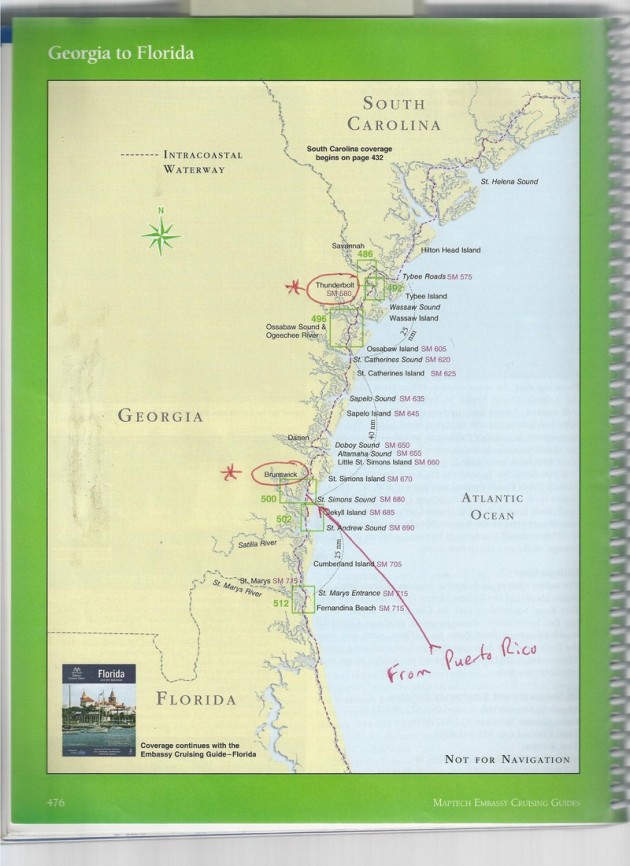 As we made good time we entered the ICW at Brunswick, following it (red broken line) to Thunderbolt, a suburb of Savannah.

On Saturday, 10th March I plan to depart Puert Rico and sail non stop to Savannah which is actually in north Georgia but close to the Carolinas. The distance is about 1200 nautical miles and should take 10 days or less. Unless we get a cold northerly blow this should be a pleasant, sunny, downwind sail. The last time I sailed this way (towards Norfolk, Virginia) I caught a 27lb Mahi Mahi en route so I'm hoping to have some good fishing as I sail. I fly home on Friday, 23rd March.

I've currently got two crew for this passage, Art, a french Canadian, and Wil, an American. I did once have a very exciting night on this route once before when sailing past the Bahamas (Click on Lightning anecdote).

I'm already booked in to a marina on the river just outside of Savannah, www.bahia-bleu.morningstarmarinas.com.

There follows regular journey updates relayed to my brother, Jeremy, by satellite phone on passage.

After that there are some of the photographs (including the fish I caught) on passage (taken by Art).

Hooked a 4 foot Mahi Mahi yesterday but lost it trying to get it on board - some good photos though. It was a beautiful irridescent blue and gold fish.

Art's been a bit sick and Wil a bit queazy, hopefully both improving.

Art had a flying fish fly into the cockpit with him the previous night. Chased it around (scales everywhere) and finally threw it into the sea. Meanwhile a wave broke over the aft, came in my slightly open hatch and soaked my bed. Same again this morning - I'm turning into a bed wetter.

Puerto Rico is great for fruit. Bought loads of citrus, massive avocados, papaya and mangos, but sickly crew not eating much, so also stopped fishing as not even eating much of my freshly stocked meats.

Wil, from Montana, was 21 yesterday but did not feel good enough for any alcohol. Art not been sick today and both of them on the up and up. Three flying fish on deck overnight and caught 2-3ft Mahi Mahi this morning. Had some for lunch with fresh baked bread, followed by fresh papaya and squeezed lime juice.

Weather and sailing as yesterday.

Crew all in good health and weather getting warmer. We passed through a cold front but high pressure now moving in. Glorious sunny day and fast sailing.

As we've made good time we're now headed for Brunswick in Georgia and then we'll spend 2 days cruising north on ICW (Intra Coastal Waterway) to Savannah. Stopped fishing because too much seaweed.

High pressure now moved in. Beautiful day but little wind, now motoring. All crew 100 per cent, but too much seaweed for fishing.

End of sea passage of 1200nms from Puerto Rico and start of ICW (Intra Coastal Waterway).

Glassy sea with no wind during day. Had pods of dolphins around the boat, turtles, including a large leatherback and also a rare ocean sunfish.

Travelled about 65nms today along the ICW and then turned off to do last 5 miles up the Medway River to dock at The Sunbury Crab Co. Local shrimp boats and crabbers docked here so we're looking forward to a good meal tonight.

The passage from Brunswick has been full of wildlife on the rivers and sounds of the ICW.

The river banks have been coated with wild oysters at low tide.

I hit the muddy bottom today but motored through it. Later, Art brought the boat to a stop and we had to reverse out, but Wil only got to 0.1 metre below the hull.

Arrived Hinckley Yacht Boat Services, Savannah. Have been leaking over a gallon of sea water an hour so being hauled out tomorrow for repair of suspected u/s cutlass bearing.

Yesterday evening Barney, the owner of Sunbury Crab Co., helped us tie up in his dock and told us a dolphin had followed us in - 5 miles up river! His wife, Elaine, had prepared a 21st birthday cake for Wil and gave him a Crab Co. teeshirt as a present. The country around here is dotted with large Southern mansions surrounded by live oaks dripping with spanish moss.

On arrival Wil, who loves backpacking in the forests of Montana, went off on a 3hr walk. He wandered onto a ladies property who told him "It's not safe to walk here, you should only drive or people will take a pop at you (shoot you) for trespass. During his walk he saw an armadillo, 2 cardinals, 5 wild turkeys, and a wild boar - which gave him a shock.

For dinner we had  " a mess of" steamed local shrimp to start which were delicious. They had sold out of blue crabs so Art then had fresh Florida Swordfish. I had fresh Carolina flounder but Wil, being a young American, had a cheeseburger and chips for his 21st birthday treat.

This morning we hailed a blue crab fisherman in the ICW and asked him if we could buy 6 blue crabs from him. He gave them to us for free but was bemused when we gave him some caribbean beers as a thank you.

Lunchtime we tied up to the dock of a magnificent georgian mansion at Vernon View and dined on fresh boiled blue crab, the last of the tuna steaks, fresh baked bread, 2 bottles of chardonnay, Puerto Rican orange slices, and finally the remains of Wil's birthday cake washed down with Puerto Rican rum. We then weaved our way off down the ICW. During the afternoon we cruised down the classic Moon River, featured in Andy William's old song - it wasn't "wider than a mile" - about 100 yards actually, but very pretty.

Flying home midday today. Leaving the boat at Hinckley Yacht services for further work on my leak. It's a much nicer environment for a boat than Morning Star Marina that I previously booked.

I've had more boat faults occur in the last month than I've ever known in such a period.

All the 6 batteries have been replaced, the AIS aerial has been changed, a leaky window has been sealed, a faulty float switch fixed, the grey water pump replaced, the tri colour navigation light replaced, anchor windlass switch replaced, the drinking water hand pump fixed, sticking roller furling fixed, the inverter connection fixed, a back up autopilot declared u/s, a new carburettor ordered for the outboard and several smaller items.

Art, Wil and myself have been working solidly for 2 days and being helped by the extremely friendly Hinckley staff. They also hauled out Vittoria to help identify our gallon an hour sea water leak and decided it was the prop packing, which they sorted. If it had been the cutlass bearing then the rudder and propellor shaft would have had to been taken off - very expensive! They market a beautiful but very expensive range of yachts - see www.hinckleyyachts.com.

We have, of course managed to squeeze in some leisure activities. 2 good local restaurants. Coachers - very cheap, good food and friendly and (honestly) each wall table had it's own large plasma TV. Tubbies was also good and on Tuesday night we had "all you can eat" snow crab for $29. Wil was too poor to afford it so he had a glass of water and we sneaked him some snow crab. Art offered to buy him a Jamieson's Whisky and for the first time in his life he was legally able to drink (it's age 21 in the USA and 25 before you can have a credit card or hire a car!). Unfortuneately, the bar maid asked him to show his ID. He'd forgotten it and was refused.

We also went across the River to Despositos (the best kept local secret we were told) where they served fresh caught seafood on newspaper table cloths and (amazingly for the States) nothing is fried. We had steamed local oysters and shrimp and just left our empty shells etc on the newspaper to be cleared up after.

The next day we tried to go to the famous Mrs. Wilkes lunchtime restaurant in Savannah (you all sit round a table, Southern style and pass the plates like you would having a Sunday dinner at home). Unfortunately it's so popular we saw a queue starting at 9.30am for 11am opening so skipped it. See www.mrswilkes.com.

Final statistic - we took our washing to a launderette called Spin City. While I handed over our laundry I asked Art to count the number of commercial sized washing and drying machines - there were 104!

Leaving Wil on the boat and paying him to polish all the stainless steel and white gel coat. He then plans to hitch hike his way home to Montana - that's a hell of a hitch hike from Georgia.

We found our leak had not gone away and the diagnosis was wrong. As a final throw the drains had blocked. Art was despatched to get drain clearing solution for Wil to put in 3 times a day and we re booked a haul out to re examine the leak. I heard today that it turned out to be a split nut on the cutlass bearing and the rudder and prop shaft have had to be taken out after all. When I was in Puerto Rico for maintenance 7 weeks ago I remember commenting how good it was that Vittoria was in 100% good shape - several thousand dollars later maybe she will be again.

I had an 8 1/2 hour stop over at Philadelphia Airport on the way home and took the opportunity to visit the city. I was surprised how interesting a city it is. I took a 1 1/2 hour sight seeing, double decker, bus tour and was surprised to see all the magnificent public buildings (presumably financed by rich industrialists) and also viewed the Liberty Bell. Philly was the home of Benjamin Franklin and where the American Constitution was written. The greatest tourist attraction for people on the bus was the Rocky Bilbao statue outside the famous steps to the Art Gallery that he was featured running up in two of the Rocky films. After a pint of Yuengling traditional lager (brewed in Philadelphia at the oldest brewery in the States - see www.yuengling.com), a meal of raw half oysters on the shell and Chesapeake Bay Blue Crabs at Dinardo's Sea Food restaurant nicely completed my visit.﻿ 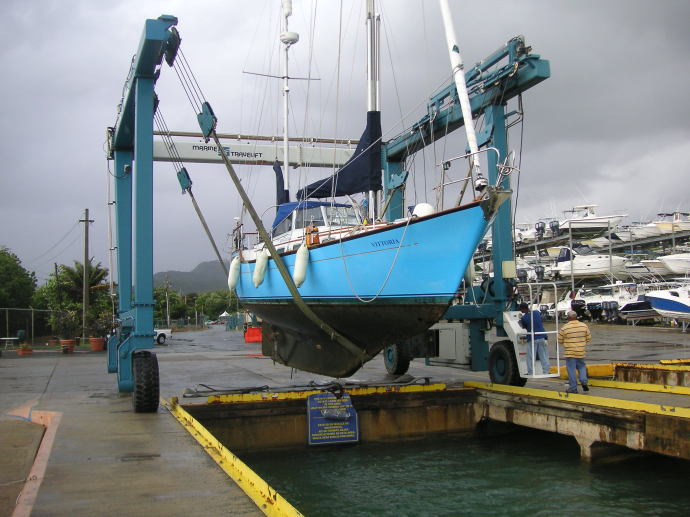 Vittoria was hauled out in Puerto Rico and had her bottom cleaned to give her a fast hull for the passage. 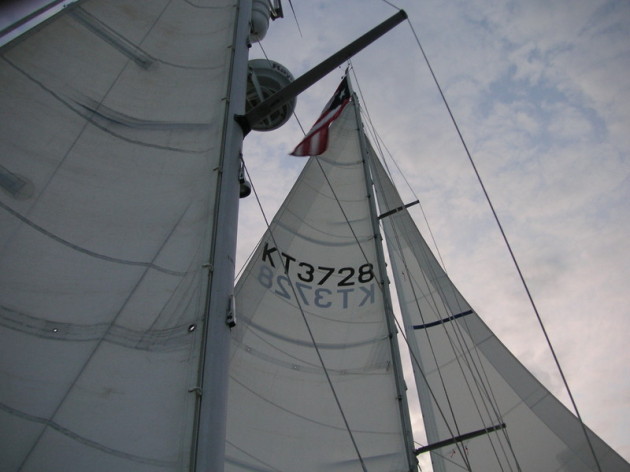 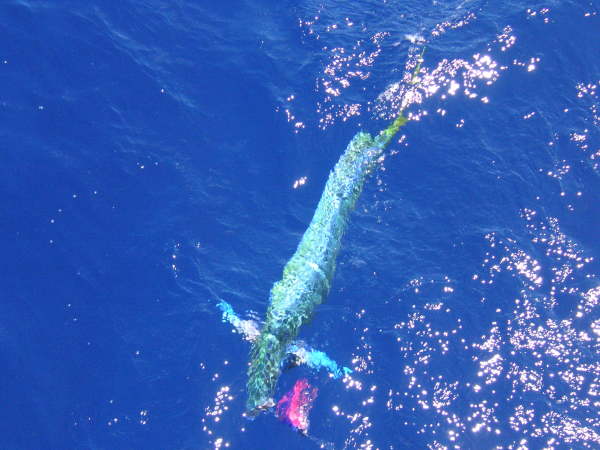 This was the 4 foot Mahi Mahi (with our pink lure hanging out) that we lost as we hauled it on board. 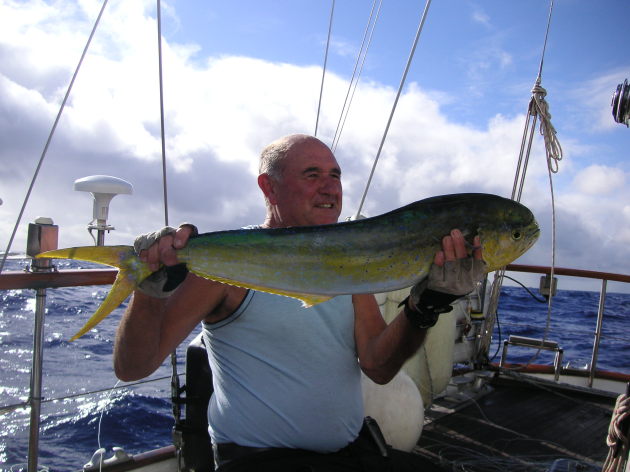 It's younger brother didn't get off, however. 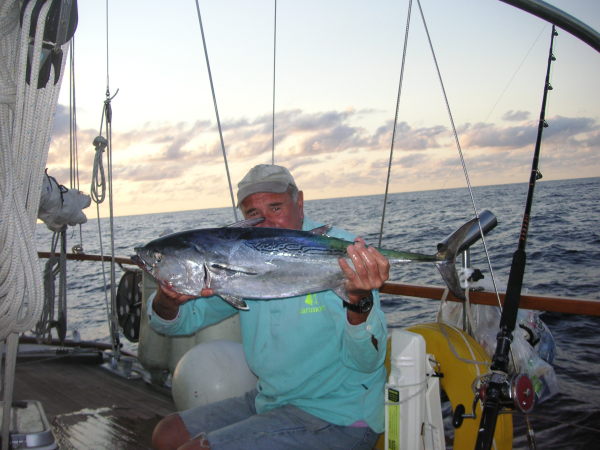 This 15 lb Tuna made a nice change of diet too. 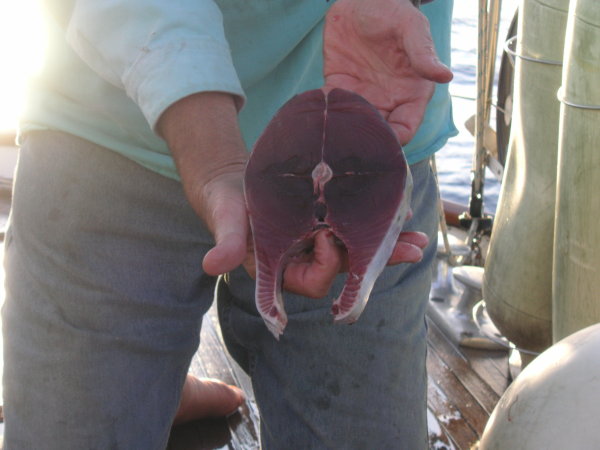 You don't get Tuna steaks any fresher than these. 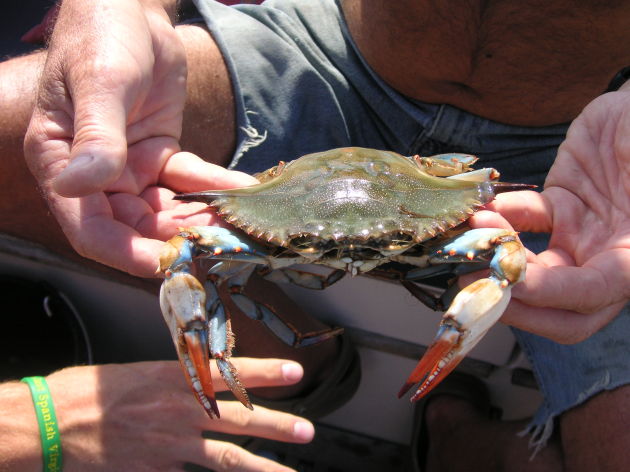 We were given 6 blue crabs just caught by local fishermen. 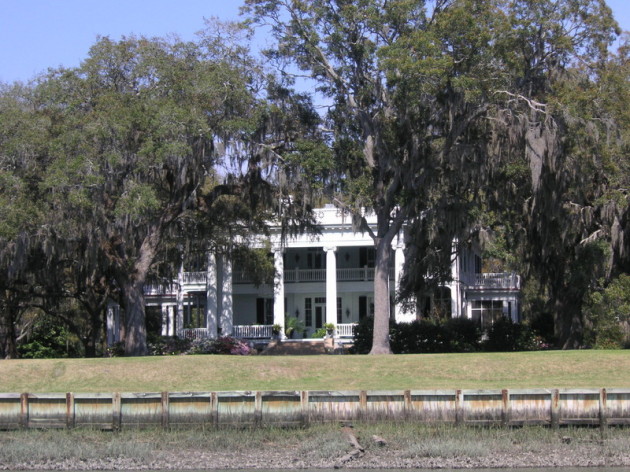 A mansion on the side of the ICW in Georgia surrounded by Live Oaks dripping with Spanish Moss. They are called Live Oaks because they lose last seasons (live) leaves and then immediately new leaves burst open as if the leaves never died. 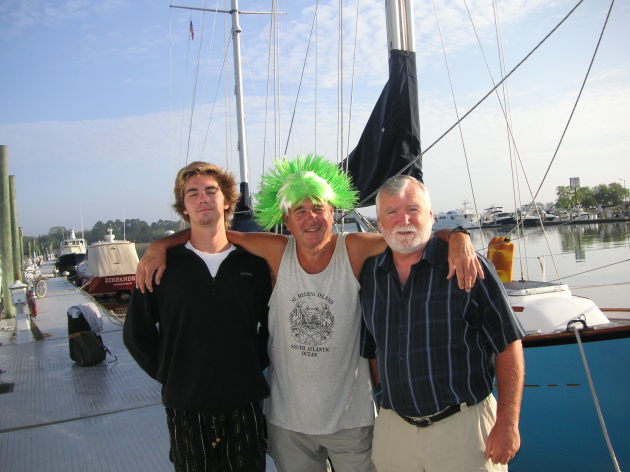 Wil, myself and Art at the end of our passage. In the South, St. Patricks day is a major celebration and I got my St. Patricks Day wig in the sale after for $8 - I was amazed they hadn't sold out of such a beautiful headpiece. It also has lights in it. Estelle says I put it on the wrong way - it should be a Mohican!

All photos taken by Art (except one above!).